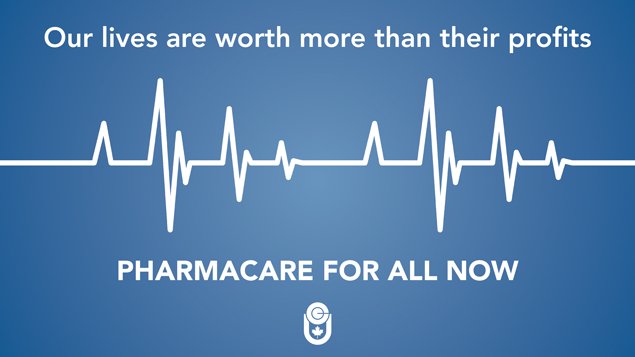 Canada remains the only country in the world with a universal health care system that doesn’t include prescription medication.

A publicly funded, universal drug coverage program paid for by progressive taxation – also known as Pharmacare – would provide all Canadians with access to the prescription medicines they need. People would be healthier and many would no longer have the economic burden of paying for medications out-of-pocket.

It’s time that Canada lived up to its original promise over fifty years ago and establish a fully universal health care system that works for everyone. It’s time for the federal government to create a universal, comprehensive, publicly-administered and sustainable Pharmacare program.

1. It will save lives Prescription drugs are among the most important components of modern health care. When prescribed and used appropriately, they can prevent and cure disease, and extend and improve the quality of life. Affordable prescription drugs literally save lives.

Pharmaceuticals are so essential to health and well-being that the World Health Organization has declared that all nations should ensure universal access to necessary medicines. Yet surveys show that 1 in 10 Canadians do not take their medicines as prescribed because of costs. This costs all Canadians, whose lives are being put at risk because of ever-increasing drug prices. Instead, a national Pharmacare program would result in more than 2 million Canadians filling prescriptions that they would not otherwise be able to afford.

It would also mean a better coordinated, safer and more efficient delivery of affordable medicines to those who need them, as opposed to the current, fragmented patchwork of private and public drug coverage in Canada that isolates the management of medicines from the wider health care system, which can result in the overuse and misuse of prescription drugs.

2. It will save money Canadians spend $30 billion to fill more than 600 million prescriptions each year. That’s more than four times what they spent on prescriptions 20 years ago. Drug prices continue to skyrocket for Canadians and more people have to choose between getting the medications they need and paying for necessities, like food or rent. Currently, 2 million Canadians incur over $1,000 a year in out-of-pocket expenses for prescription drugs, and one in five Canadian families can’t even afford to fill their prescriptions because of cost.

In fact, because so many Canadians aren’t taking their prescribed medications due to increasing prices, they can later develop illnesses and diseases which place financial burdens on other services within the Canadian health care system that cost far more than those medications would have in the first place.

Canada’s parliamentary budget officer stated in 2017 that a national Pharmacare programs would save $4.2 billion every year, not only for Canadian workers, but for business owners who will no longer have to pay ever-increasing prescription coverage rates for employees. It’s a win-win situation for workers, consumers, businesses and taxpayers alike. Every advanced country with a universal health care system provides universal coverage of prescription drugs — except Canada. Yet according to a recent Angus Reid national survey, 91% of Canadians agree with the concept of a universal Pharmacare program, and 81% believe this should be a priority issue.

Canadians value universal health care more than any other institution in the country. They also understand the similar advantages of having a likewise universal Pharmacare program. It’s no wonder so people throughout the country support it. Forward to 2002, the Commission on the Future of Health Care in Canada (the Romanow Report), chaired by former Saskatchewan Premier Roy Romanow, recommended that all governments in Canada work together to integrate medically necessary prescription drugs within Canadian Medicare.

Canadians have been waiting long enough for affordable prescription drugs. It’s time for action. It’s time that Canada lived up to its original promise over fifty years ago and established a universal, comprehensive, publicly-administered and sustainable Pharmacare program for works for everyone.