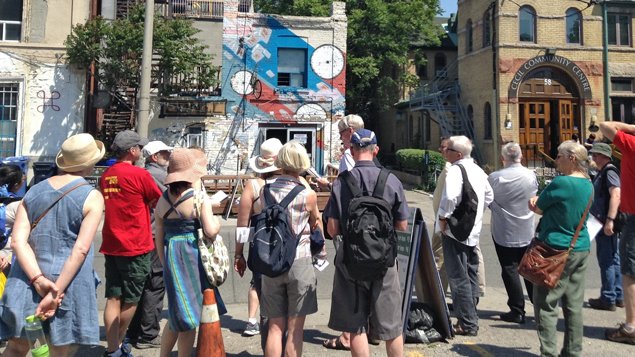 Now that some of the pandemic restrictions are lifting and folks want to get outside with their loved ones, I want to share some details about the Toronto Workers History Project (TWHP) and some labour history walking tours they’ve developed. If you’re interested in getting out of the house and away from endless Zoom calls and Teams meetings, grab a backpack with some snacks and a water bottle and head out on a worker’s history trek!

In collaboration with the Labour Council, the TWHP developed a series of maps, including three walking tours. Each one covers a different time period and area:

Map C: Post-War Toronto, takes us to key labour sites from the end of World War II to the present.

You can find the comprehensive walking tour maps online here.

By making these stories available through a variety of media for audiences of all ages and backgrounds, their goal is to educate the people of Toronto and beyond, and also to inspire activists in social-justice and labour movements with the lessons from the past for the struggles to change the world today.

The Toronto Workers History Project (TWHP) is a large group of workers, unionists, professors, students, artists, teachers, librarians, educators, researchers, community activists, and retirees dedicated to the preservation and promotion of the history of working people in Toronto. They’re committed to bringing to light the experiences of working people and their contributions as individuals and collectively to the building of this city, in the home, in the paid workplace, and in the community.

The TWHP has developed more walking tours, and if you’re interested, you can find more details about them here: http://twhp.ca/resources/walking-tours/

Wishing you a safe and happy long weekend!