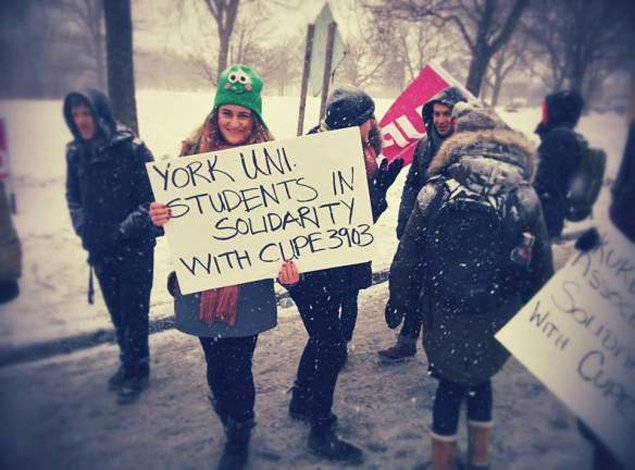 The York Cross-Campus Alliance (CCA) is calling on the York University administration to negotiate a fair deal with CUPE 3903, and help avert a labour disruption on campus.

With a strike by more than 3,000 education workers less than a week away, the administration must make additional efforts to demonstrate its good faith and withdraw all the concessions it is demanding from CUPE 3903. These concessions represent an attack both on the working conditions of contract faculty, teaching assistants, and graduate assistants at York and on the quality of education that our students receive.

The Employer’s proposals include all but eliminating the longstanding conversion program, a popular initiative that has helped long-serving contract faculty find full-time appointments, and follow the elimination of hundreds of graduate assistantships since the last contract was ratified. This blatant attempt at union-busting has affected other bargaining units, as the level of support for faculty has diminished and other workers and students have taken up the extra work.

The CCA stands in solidarity with the members of CUPE 3903 and in full support of their collective bargaining rights. In the event of a strike, the CCA expects that all classes will be cancelled, as they were during the 2015 strike by CUPE 3903, and that the Employer move quickly to return to the bargaining table to reach a fair settlement as quickly as possible.

In addition, the CCA expects the University to respect the Senate policy (2.2: “Fairness to Students”) that protects the rights of students who choose not to cross picket lines. While the same rights do not extend to faculty and staff, the CCA will nevertheless encourage its members to join and support picket lines on their own time, in support of CUPE’s struggle against precarious labour and for improved learning conditions for students.

The administration’s approach to labour relations with CUPE 3903 has become a cause for alarm among all the other employee groups at York. In the next few months, a total of five campus unions will be in bargaining with the University: YUFA, YUSA (Units 1 and 2), CUPE 1356, and OPSEU 578. There have already been two strikes on campus in the last year—food service workers and Seneca college faculty—with a third strike looming next week.

If the Employer takes the same hard line as it has with CUPE 3903, the year ahead could well be marked by ongoing labour disputes that disrupt the academic calendar.

The Employer has an opportunity to reverse its combative approach to labour relations and begin to create the conditions for labour peace on campus. But it must negotiate a fair deal now.